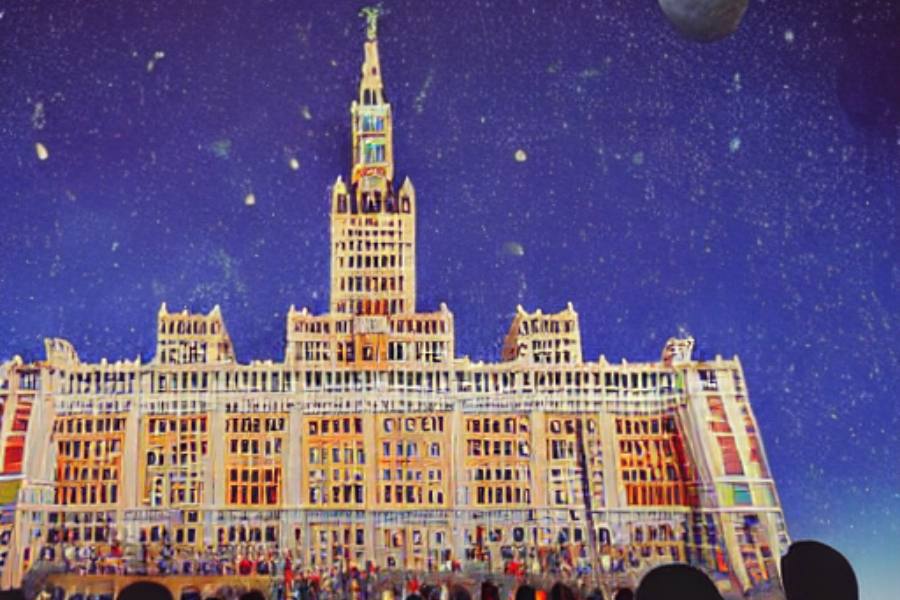 How has the work of teachers at Russian universities changed since February 24?

Illustration: Teachers fear persecution, mobilization, and the prospect of border closures. Many want to psychologically distance themselves from the government. Illustration created with the help of Stable Diffusion

In my previous article, “Restoration of the Soviet and New Political Education,” I discussed what has changed in academic programs and educational content at Russian universities since February 24.

In this new work, we will focus on the life of the university teacher.

How This Study Is Structured

This study is based on 37 interviews with teachers and scientists collected in May-June 2022.

The sample included employees of universities and research organizations located in Russia and abroad. Among them were representatives of various specializations, women and men, aged 22 to 50, with various political views and different statuses in the university hierarchy. All quotations are anonymized for respondents’ protection.

We conducted qualitative, rather than quantitative, surveys. It is important to remember that it is difficult to judge the prevalence of phenomena based on such surveys. We recorded recurring events, tactics, and judgments. Further research is needed to understand their prevalence in the various regions of Russia.

Are Universities Outside of Politics?

For many years, the idea of “the university outside of politics” has been cultivated in Russia, along with other slogans of the depoliticization of society.

At the same time, “politics” has been interpreted as broadly as possible. Not only have political demonstrations been suppressed, but so too have protests against violations of the law.

During this time, teachers have become used to solving most issues with targeted practices. American anthropologist James Scott called such skills and knowledge “metis”—a local, irrational, targeted means of turning a situation in your favor with insufficient power and resources.

The Departure of Teachers

Teachers in socio-humanitarian disciplines left Russia, fearing persecution for political reasons. Representatives of IT specializations left due to the relocation of their partner companies.

One way or another, all have left due to a high degree of uncertainty and an expected drop in living standards. Teachers fear persecution, mobilization, and the prospect of border closures. On top of this, many indicate that they want to psychologically distance themselves from the government.

The departure of specialists has a meaningful influence on the quality of education, including the range of available disciplines.

A respondent from a Petersburg university discusses their specialization:

“Now there is a definite question of what will happen next, what will happen next year, because many have left. As if breaking apart. This time they do not really want to return to the current reality in our country. Roughly speaking, they may always have wanted [to leave], and this gave them a real reason to. It’s very scary, because really great people are leaving teaching positions, research positions, and academic positions. This significantly lowers the level at which students themselves learn.”

Another consequence of the departure of teachers is a generational gap and, as a result, an interruption in the tradition of teaching.

In the most in-demand technological specializations, middle-aged specialists—the most productive segment of the educational staff—are leaving. The older generation already participates only weakly in scientific activities, even though they continue to teach a number of key courses.

Educational program management positions, previously held by middle-aged specialists who have now gone abroad, have been filled by recent graduates with little research experience and no leadership experience.

The Dual Position of Teachers

Some teachers have ended up in a dual situation. On one hand, they do not want to be in Russia. On the other, they are not planning to stop working at their universities of their own accord.

Thus, they continue to work for Russian organizations. There are several reasons for this.

Why Not All “Unreliable” People Are Fired

Universities try to fire opposition-minded teachers who work from abroad. These attempts, however, come up against the inefficiency of administrative control and the tradition of mutual support in the teaching environment.

One Petersburg respondent said that he has lived abroad since the start of March, but his departmental colleagues inform the administration of his full-time presence at regular meetings. He conducts all classes and meetings remotely.

Another reason why unreliable people are not fired is the fear that priority educational programs will close. In some regions, many teachers in IT departments are leaving for commercial projects. Employees are in short supply. At the same time, the main opportunities for state funding—and money—are concentrated in technological departments. If even one or two teachers are fired, this can seriously damage the program. Therefore, some universities turn a blind eye to the physical absence of teachers from the country.

University education entails teachers having active contact with students. In this new situation, the content and style of interaction is changing.

From early on, many people faced a moral dilemma: be silent and distance themselves from external events or respond to troubling conversations and students’ direct questions. Most often, teachers have chosen self-censorship. The only exception is small universities and close-knit master’s programs in which students and teachers have developed close, trusting relationships.

The tendency toward self-censorship has been noticeable at Russian universities for several years already. Respondents from several cities informed us that Center E (The Main Directorate for Combating Extremism in the Ministry of Internal Affairs of the Russian Federation) has been checking the topics of all master’s theses. As such, respondents have begun to correct the names of official documents.

In headings, they change the names of foreign agents to the social networks or sites where they publish. They replace the names of organizations or potentially controversial research topics with abstract designations:

This year, a Petersburg university denied the defense of a dissertation, the topic of which was related to Ukrainian veterans.

Silence as a Virtue

Self-censorship has also spread to work with students. With the introduction of new criminal prosecutions for defamation and disinformation and an increase in the number of denunciations at universities, teachers have begun to interact more carefully with students.

A respondent from Omsk notes that students’ refusal to discuss controversial topics has become a symbol of virtue:

“Yes, one child asks, a second records on the phone, and all of this is sent to the police. Administrative proceedings are started, people are fired, they are pushed out of work, etc., and all of this happens very quickly. Smart students in this situation prefer, at least, not to fall under this.”

That is, “good students” know how to restrain themselves and smooth over a situation, just as teachers themselves do.

At the same time, some teachers consider it their duty to protect students from the excessive politicization of education. People with various positions—most often opponents to the war—refuse to conduct classes based on manuals that have been sent to them for curatorial hours and meetings outside of the classroom dedicated to the new version of Ukraine’s history. They do not pass along information about which of their students was present at university-wide lectures, with invited guests, on patriotic topics and other topics related to the state’s justification of the current situation. They do not review materials that have been sent to them but merely sign documents to show that the meetings were conducted.

Which forms of communication remain for students and teachers?

They exchange encrypted messages. James Scott called these “hidden messages”—implicit ways of showing a negative relation toward authority. The actions and messages themselves are sufficiently neutral to be barely noticeable, but can be read and understood in the relevant context.

For example, a respondent from a Petersburg university says:

“The situation is as it was in Soviet times. It seems to me that the same thing could have occurred then. Everything on the level of comments, jokes. Maksim Katz and others periodically appear on the list of students.” (Blogger Maksim Katz has been declared a “foreign agent.”)

Teachers sometimes fear that authorities will notice such actions outside of the university. A teacher from one Moscow university discusses a study group’s collective exit into the city:

“We went on an excursion and [I] said, ‘Just don’t bring anything yellow with you.’ And one girl came with a bright yellow water bottle. I said: ‘What are you doing!’ and she replied, ‘Oh, I didn’t even notice.’ I thought that the police would come. I made very scary eyes and she hid the bottle somewhere. Such are things. Maybe she wasn’t wearing blue, but it’s already impossible to know what to fear.”

“My University” and “Our Swamp”

“My university.” As I outlined in my last article, teachers from state-of-the-art universities with a high level of teaching, research, and effective management have suffered the most since February 24.

Teachers at such universities view these changes as the loss of “my university,” on a par with the loss of a home. They experience the withdrawal of opportunities to participate in the administration as well as a divide between leadership and teachers. They are in a state of apathy and despair due to the impossibility of restoring “my university” and are in constant fear of punishment for seemingly ordinary work.

“Our swamp.” In a more typical regional university with weak management, changes are viewed ironically.

“A swamp cannot change, it can only be dragged into itself,” said one respondent.

She compares the situation with the events of previous years. Initiatives (such as patriotic education or nanotechnology) come down to the university from above, but no one executes them. Initiatives can appear at the university—they can hang propagandistic posters, etc.—but this hardly impacts daily work. Teachers and students answer orders with quiet sabotage.

“Our swamp” adapts poorly in any direction, which allows it to survive. Teachers at such universities are accustomed to a lack of communication from leaders but do not feel that they are facing any significant risks to their ability to express their position in class or to their work as usual.

At the same time, they strive to preserve their work—and not betray their own values. But can the weapon of the weak rebuild academic meaning?

Lidiya Yatluk is a sociologist and researcher of the academic profession in Russia.