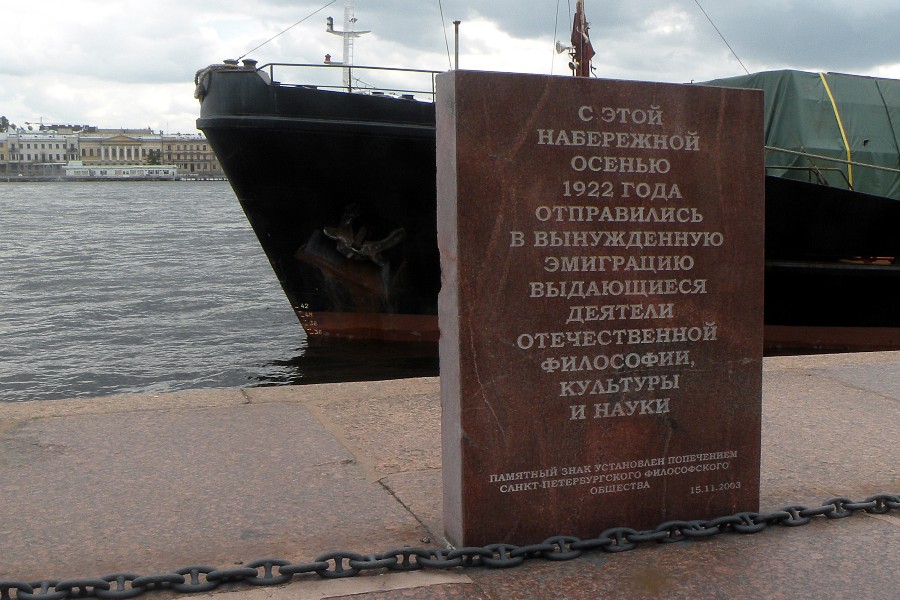 Photo: In 1922, the Soviet government exiled around 200 Russian scholars via steamboats and trains. Photo: Vitold Muratov. Own work, CC BY-SA 3.0

Russian academics are experiencing mass forced migration, and not for the first time.

The Revolution of 1917 caused the mass departure of scholars and teachers—many left for political reasons, but quite a few left for economic reasons, simply running from hunger and illness. According to historical accounts, in 1919-20, MSU alone lost 12 professors who could not withstand the hunger and moral humiliation. In 1922, the “humane” Soviet government exiled around 200 Russian scholars and philosophers via steamboats and trains due to their “antirevolutionary views.”

It is difficult to determine the overall number of scholars and researchers who left Russia, but according to the most modest evaluations, between 3 and 10 percent of the 10,000 scholars and teachers of the prerevolutionary period left Russia—that is, no fewer than 1,000 people.

It is clear that a significant number of scholars and teachers in the field of higher education either welcomed the new regime or simply resigned themselves to the need to cooperate with it.

Russian Projects in the World

Nevertheless, a good number of Russian scholars, teachers, and students ended up abroad—primarily in Germany, Czechoslovakia, and Serbia.

In 1922, Russian academic groups were immediately created in countries where there was at least some kind of academic emigration. As a result of their collaboration, various academic institutes and projects appeared. In particular, they initiated the creation of several universities abroad.

These groups and the institutes that they created not only united professors and students who were refugees from Russia. They also actively maintained relations with foreign academic institutions. The members of these groups participated in academic congresses, published academic manuscripts, and organized public seminars and academic conferences.

Congresses of Russian academic organizations were held to coordinate between different groups. The first congress occurred in Prague. It is important to note that the political diversity of members’ views was completely welcomed. They attempted, however, not to invite the more radical representatives of the community—both on the right and left—to the congresses in order to avoid a possible schism.

It is important to note that Russian communities were not only engaged in science and education, but also actively collected donations and helped scholars and students who found themselves in difficult situations. For example, between 1922 and 1930, the Committee for the Preservation of Higher Education among Russian Youth Abroad, or the Fedorovskii Committee (named after its director, M. M. Fedorov), was active in Western Europe. Its goal was to help people who did not finish university in Russia due to war or the revolution to attain higher education.

The most active Russian groups operated during the 1920s and the first half of the 1930s. Their main function was to continue research, particularly in the areas of Russian language, history, politics, society, and culture.

This, it seems, was their strength and, simultaneously, their weakness. Their exclusive focus on the USSR made their knowledge in demand, particularly during the politically tense 1920s. At the same time, however, such centers were critically dependent on the conditions and political climate in particular countries.

The political upheavals of the 1930s—in particular, Hitler’s rise to power, the departure of scholars, and the lack of new scholars—practically ended the work of these communities or turned previously independent institutions into scientific appendages of the Third Reich by the end of the 1930s.

This is particularly noticeable in the history of the Free Russian University in Prague. After the Nazi occupation began, the university effectively turned into a military academy that taught military subjects related to counteracting the Red Army.

Those Who Left and Those Who Stayed

Nevertheless, it is hard to underestimate the contribution of Russian academic groups to the development of Russian scholarship and to the national scholarship of the countries that housed them. That the divide between academies was enormous and cooperation becoming increasingly unlikely—and even dangerous for those who remained in the USSR—was an entirely different matter.

In addition, academics abroad themselves negatively evaluated the actions of those scholars who remained in the USSR. For example, they called academics S. F. Ol’denburg and A. E. Fersman “opportunists” for their cooperation with the communist authorities and did not see any other path than emigration for the salvation of Russian scholarship.

That being said, not all scholars agreed with this assessment. In 1922, the academic V. I. Vernadskii asserted:

Academic work in Russia goes on against all odds… This clash—part support, part persecution—of academic work in Soviet Russia is very interesting. Now the ideological defense of scholarship must begin—but scholarship should also take everything that it can from its enemies, the communists.

After February 24, 2022—Russia’s attack on Ukraine—the next step of forced academic migration began. True, the current departure of academics and teachers is not as obvious as it was after the Revolution of 1917.

According to preliminary studies, the number of scholars who have left Russia greatly exceeds academic emigration following the revolution. The centers of this emigration have also significantly changed.

Number. To date, at least tens of thousands of people connected with scholarship and higher education have left Russia since the start of the war, primarily out of fear of border closures and general mobilization.

Geography. Their destinations have also changed. On the one hand, Russian scholars and researchers have traditionally tried to go to the countries of the European Union—Germany, France, the Czech Republic, Poland, etc.—or Great Britain.

Because of dramatically changed visa policies, however, they have mostly ended up in countries that are visa-free to Russian citizens: Georgia, Armenia, and Turkey.

Many people who left at the beginning of March and in April have even returned to the country to settle matters that had been abandoned in a hurry.

For some, their departure was related to personal security concerns—either persecution by the government had already begun or it was a threat. The proportion of these individuals as a share of overall academic migration, however, seems small.

Soon after their departure, many Russian academics and teachers joined existing projects, including academic, pedagogical, and aid projects. The most recent projects have often been created by those who already lived abroad and had specific contacts and opportunities to support those scholars and teachers who left the country.

Free University. Many have joined the extant Free University, which has become a place for teaching and scholarship that is free from ideological censorship. Russian remains its main language of instruction.

The support network of ANEE. Foreign universities, particularly in Germany, have also begun to actively support academic refugees—not only Ukrainian scholars, but also those who are fleeing from aggressor countries such as Russia and Belarus—by creating a support network for the scholars of ANEE.

The Discussion Has Only Just Begun

Within the bounds of the discussion that has begun, some scholars and teachers who have left the country accuse those who remain of “appeasement” and “working for the war”—just as occurred with post-revolutionary emigration. They regard research and teaching at universities whose rectors publicly and clearly support the war as morally questionable.

At the same time, a different segment of emigrés note that those who remain in Russia “are returning to the classroom to tell students, albeit quietly, about Hannah Arendt.”

Many groups of scholars are trying to discern what needs to be done under the conditions of war and emigration, when a large part of the community—for example, scholars of humanitarian and social knowledge—cannot emigrate, not so much for political reasons as for personal reasons. Along these lines, Russian scholars have created the group “Social Researchers Without Borders,” where they discuss the latest research on forced academic mobility, aid groups, changes in academic ethos, etc.

It is obvious that, half a year after the start of the war and the departure of scholars, it is difficult to speak of tendencies within the Russian academic community abroad. It is nevertheless obvious that many of the problems that faced academic refugees after the revolution are similar to current issues, moral and financial questions chief among them.

At the same time, it is clear: the goal of academic emigration will become the preservation and regeneration of academic and research personnel for Russia. Under the circumstances of continuing war and academic boycott, which is widespread among scholars and students who have left Russia, this will be particularly difficult.

Dmitry Dubrovsky (Candidate of Sciences in History) is a research associate at the Center for Independent Sociological Research (St. Petersburg), a researcher at the Laboratory for Academic Freedom (CEU), and a member of the Human Rights Council of St. Petersburg.