Restoration of the Soviet Approach and New Political Education 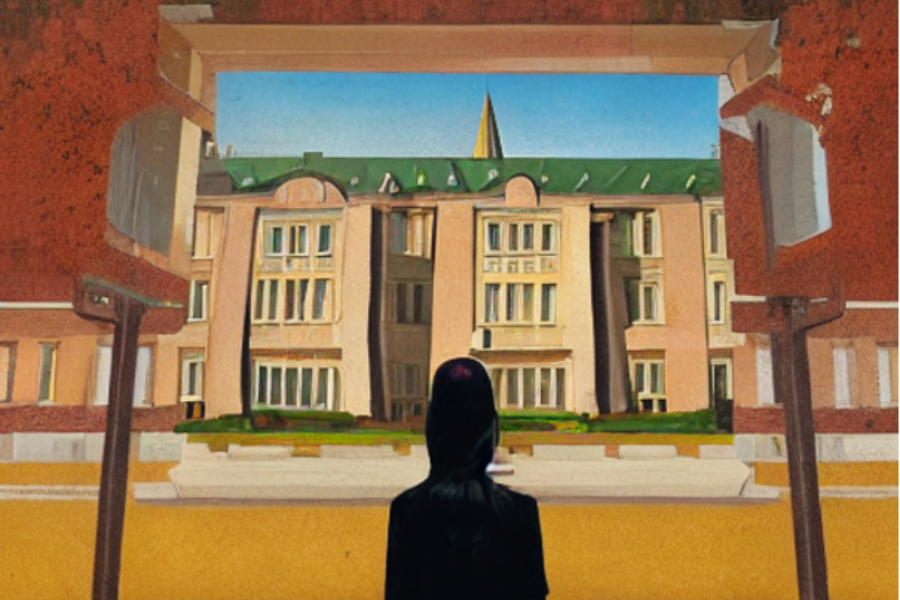 Characteristics of Education at Russian Universities in 2022

Illustration: He who has worked less on development and internationalism has suffered less. Illustration made using Stable Diffusion.

A new semester draws closer, and first-year students will be arriving at different universities than their predecessors did last year. Infrastructure, the array of subject offerings, internal operating rules, and the general path of development have all been touched by changes.

In the first text of this series, I will discuss the first results of our study: general challenges in the higher education system and individual disciplines.

The study is based on 37 interviews with teachers, collected in May-June 2022.

The sample included employees of universities and research organizations located in Russia and abroad. Among them were representatives of various specializations, women and men, specialists ages 22 to 50, and people with various political positions and differing statuses in the university hierarchy. All quotations are anonymized to protect respondents.

We used a qualitative approach, and it is therefore important to remember while reading that it is difficult to judge the prevalence of these phenomena. We noted recurring events, tactics, and judgements, but their representation in various parts of the country requires further research.

The Three Paths of Development of Higher Education

The respondents identify a common problem among universities: the search for a new ideological direction for the development of higher education.

Respondents suggest that, in the absence of an official orientation toward international standards, three paths are possible:

The first path—a turn to the East—would entail expanded cooperation with China and other countries of the East Asian region. Such engagement would allow Russia to remain an international player and develop engineering programs, which have become the priority of scientific development and education.

Covert cooperation implies a lack of institutional contacts but the preservation of work through personal contacts.

The main danger of this path is the lack of formal acknowledgment of students’ cooperation, which could complicate their mobility in the future.

“Maybe we ought to sometimes use the idea that everything new is well-forgotten old things. Look at old Soviet schools, some kinds of sciences, and choose an example. Thereby fostering in the new generation not only the ability to crave scientific research, but also, in a sense, some kind of patriotism in parallel. So that they understand that they are equals to the Soviet school.”

Respondents suggest that reinventing and renewing Soviet standards and ideals could inaugurate a new stage of Russian science.

Significantly, all research participants agree that there is no new source of development and transformation in modern Russia. Universities need either international cooperation or the restoration of past principles.

Backwards to the Specialist Degree?

In 2007, when I applied to university, there was a major ongoing change from the specialist degree to a two-level system. I studied at the bachelor’s level, and those who planned to achieve the specialist degree studied alongside me. The programs were almost the same, except that those at the master’s level were given several additional general courses and instructors’ special courses.

This year, a new transition is occurring, but its content is still unclear.

After the cancellation of the Bologna system of education was announced, there were many concerns that students would have to study in new programs created on an emergency basis. The degree of intensity, however, gradually declined.

First, Minister of Science and Higher Education Valerii Fal’kov stated that it was only necessary to limit movement between specializations and introduce specialist’s degrees based on disciplines that are key to the economy.

Recently, MSU Rector Viktor Sadovnichii said that the bachelor’s level will not be abolished. Specialist’s degree programs will be expanded. Graduate programs will return from academic to scientific status.

The situation was not a cause for concern for most respondents: they expect renaming and new document rather than major substantive changes.

What is Changing in Educational Programs

After February 24, many technological companies announced their departure from Russia. For many universities, this has meant the closure of corporate departments, research centers, and other collaborative educational formats.

Moscow. As one respondent from a major Moscow university reports, last semester turned out to be unusually easy and free. The company to which their specialization was anchored left, cutting all ties with the educational institution. Students found themselves liberated from their classes—without any replacement.

Omsk. A respondent from an Omsk university says that passing specialized subjects was often connected to completing certifications at partner companies, but now such exams are impossible. That type of examination was replaced by an internal examination, which reduced its quality and objectivity.

Complications also appeared for internships. International internships became inaccessible to students. Some of the typical companies have left, and the public behavior of many companies has repulsed students. Few suitable places for training remain.

For example, one respondent from St. Petersburg said that even the popular and previously highly rated Yandex has now lost supporters among students. Currently, the latter seek to end up in startups or create their own projects.

The most meaningful changes have occurred in socio-humanitarian specializations and IT.

Changes in socio-humanitarian disciplines. Last semester saw the elimination of:

It became clear after the Russian president’s announcement that political science will also be downsized at universities in the coming year.

Philological respondents fear that a similar fate awaits departments of foreign languages. In connection with the rejection of an orientation toward international cooperation, teachers expect reduced demand for the English language and potentially its replacement by university-wide disciplines from the bloc of Russian history.

Changes in IT. Information technologies remain a priority for the government—they are allocated funding in the form of expanded budgetary places, subsidiaries, and grants. In reality, however, there are issues with the software:

In many cases—from graphic design to informational security—there are no analogs in Russia.

Moreover, some of the practical disciplines have disappeared from programs because teaching companies have left Russia.

As early as March, university leadership quickly brought about changes in the educational process at some universities. Elsewhere, announcements about the rector’s orders and university-wide messaging are only coming now.

Vice-rectors of education and youth politics have appeared at universities where there had previously been no such position. Most frequently, they organize work with students and control their actions outside of school hours. Control over projects and researchers’ communications usually lies with the vice-rector of safety.

Such additional education has not appeared everywhere. Some respondents noted that they had expected some sort of instructions or rules from management, but to date there have not been any requests or even internal commentary about the situation.

The majority of respondents agree that universities have felt the crisis in the development of science, education, and management. Top-down decisions quickly become common, and their implementation is controlled.

Changes are not expected at small regional universities because innovations usually remain at the level of orders on paper and strong recommendations, while more productive employees have already gone abroad, to Moscow, or to St. Petersburg.

As a result, a university’s success at preserving itself looks like the old meme “Snail is the worker of the month”: he who has worked less on development and internationalism has suffered less.

In this article, I dedicated most attention to the educational process and to that which students may encounter from their first year on.

Other changes in universities include:

Next, we will discuss how the life of university teachers has changed.

Lidiya Yatluk is a sociologist and researcher of the academic profession in Russia.

Yulia Chukalenko, PhD, a researcher of education, contributed to this research.