“We are the University” 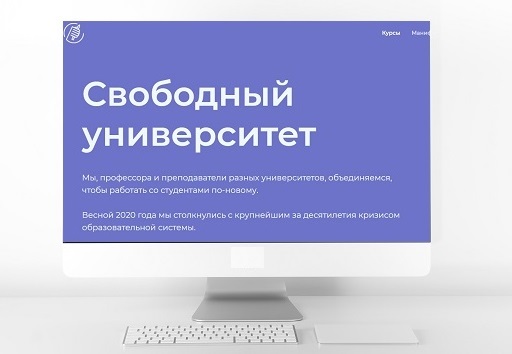 A new Free University, organized by professors who resigned or were dismissed from the Higher School of Economics, is opening in Moscow.

Photo: You can only study online at the new university. (Website screenshot)

Free Universities of the 19th Century

The establishment of a university is always an event in and of itself. When a new university is founded, its name often reflects the political moment or reason behind its creation.

This explains why the word “free” frequently appears in the names of those universities that emerge during a time of political or sociocultural crisis.

The Free University of Brussels was founded in the 19th century as a response to the totalitarian control of the Catholic Church over higher education in Belgium: there, freedom was understood first and foremost as freedom from the control of religious doctrine and censorship.

Later, the Free University of Amsterdam was established with the same goal in mind. It chose its name specifically to underline its independence from both the State and the Church.

In 1861-1862, the Free University referred to courses taught by leading scientists and professors of the St. Petersburg University who conducted lectures for students dismissed from their studies because of their revolutionary attitudes, as well as for students in need.

Free Universities of the 20th Century

In the 20th century, the fact that certain groups of scientists could no longer remain in a given country—primarily as a consequence of an upheaval or revolution or because of some other kind of turmoil—became an increasingly thorny issue.

In the wake of the Russian Revolution of 1917, emigrants, many of whom were scientists, found themselves scattered all over Europe, including Prague, where the Russian Free University (originally the Russian People’s University) had been established by 1923. It served as a teaching and research haven for scientists and professors for whom the Bolshevik Russia had no room.

Similarly, the Ukrainian Free University opened in several German cities, where it still exists to this day. Ukrainian scientists who did not wish to live and work in Soviet Ukraine were free to teach there.

After the war and the division of Germany, there arose the question of whether a university could be established in West Berlin, since its predecessor remained in the Eastern, Soviet-occupied side of the city. This is how the now-world-renowned Free University of Berlin came to be established.

In 1978, the Sakharov Free University was founded in Germany. There, third-wave emigrants gave lectures on Russian language and the history, culture, and politics of the USSR.

During that same period, Soviet restrictions also led to the emergence of universities free from state control outside Germany. The Jewish People’s University opened in Moscow with the goal of teaching mathematics to Jews who were not admitted into accredited universities due to state-sponsored Soviet antisemitism.

From the 1990s, new Free Universities began emerging. The word “free” was used

Free Universities of the 21st Century

A free university emerges when and where there is a dire need to surpass serious political, administrative, or other barriers in order to become truly academically independent.

The recent creation of the Free University in Moscow is a telling example.

Suffice it to recount the most recent events surrounding the Higher School of Economics in Moscow: Gasan Guseynov’s case; the adoption of ethical codes for faculty and students that, according to critics, infringed on academic freedom; and the revocation of Doxa’s status as a student organization.

At HSE, which had hitherto been remarkably liberal for a Russian university, the space for academic freedom has shrunk substantially.

A potent argument that these changes are political in character emerged from the reorganization of the Faculty of Humanities. More than twenty staff members were fired on account, many believed, of their “political disloyalty.” However, HSE itself denied this, attributing the decision simply to “reorganization” and the fired academics’ “lack of publication activity.”

The coronavirus crisis revealed not only the threats to academics (for example, possible layoffs), but also the surprising opportunities available to them.

Kirill Martynov, one of the HSE staff members who was dismissed, calls attention to these contradictions:

“The accelerating bureaucratization of education, the creation of new ideological committees tasked with controlling the faculty, and the universal shift to online education due to the pandemic… If we take a look at these developments combined, the situation appears clearly absurd: you are teaching from your kitchen in sweatpants and you have to fill out a variety of reporting forms and pledge to not comment on ‘acute social topics.’

As a result, it turns out that we can teach and learn online without bureaucratic middlemen, without chasing the h-index. The virus put an end not only to the traditional education system, but also to traditional middlemen, as well as to the traditional and often excessive demands on both the educator and the subject of teaching.

This is why, knowing the history of science and especially the history of the Free University of Berlin, we decided to be modernly independent from the state.”

It is with this goal in mind that the dismissed HSE faculty established the Free University in Moscow: “If the university cannot be free anymore, it means we need a new Free University.”

They set the following goal: “to construct the university anew, freeing faculty from administrative diktat.”

The authors of the new university’s manifesto address the issue of novel technologies. Until recently, these technologies “aided those who wished to demolish the university community and destroy its autonomy.”

However, these same technologies can also serve the cause of academic freedom. While learning how to lead lectures online, professors sensed “glimmers of freedom” that they now want to preserve.

What Can One Learn at the Free University?

Applications to the Free University open on September 1. Courses are taught not only by former HSE professors—including Kirill Martynov, Elena Lukyanova, and Gasan Guseynov—but also by other well-known public figures, such as Dmitry Bykov and Vyacheslav Inozemtsev. In addition, the faculty includes foreign professors.

Among the courses announced for the first year are:

Professor Elena Lukyanova noted in a conversation that her messages are “simply exploding” with people who want to give lectures for free: “fired physicists from Tyumen, economists from Bashkiria, medics, Afrikaans experts.” Notably, a lot of them have quite successful careers—yet evidently “the appeal of [giving] lectures without state control is strong.”

At this new university, lecturers will conduct various courses of their choice. Students will be enrolled based on their interests, with a cap of 20-25 people per class, as dictated by the constraints of the online platform.

Upon finishing the course, students will receive a recommendation letter from the instructor.

Clearly, this new project leaves more questions than answers. The most important unknown at the moment is: how will the government and the academic community react?

Thus far, some faculty view the project not as a solution to academic challenges, but as a “way of addressing political questions through methods of protest.” Others foresee that the university will be labelled a “foreign agent,” noting that “George Soros’s times are over” and that the “recognition of a university diploma requires license and accreditation.” This will not be possible without coming to some kind of agreement with public authorities.

It is not yet known how government officials will respond. One can only guess that the idea of education outside of government control is unlikely to be welcomed in Russia, despite the fact that the announcement about the establishment of the University explicitly declares that the new institution does not wish to “compete with public institutions.”

← Previous: Who Came to Modernize Universities? Next:What Kind of History Will Investigators Write? →