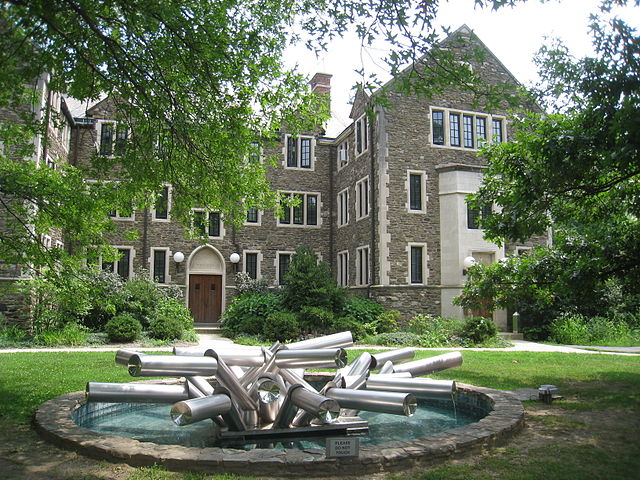 Photo: Bard College motto—A Place to Think. How did one of the world’s most well-known art and design universities end up on Russia’s list of “undesirable organizations?” (Daderot, Wikimedia. Commons)

The First Victim of Future Amendments

Bard College, a private institution based in New York, was labelled an “undesirable organization” in Russia. SPbGU immediately terminated an agreement with Bard that had, over the past 25 years, enabled more than 2,000 Russian students to receive not only an SPbGU diploma, but also a diploma from the prestigious American college.

In fact, the amendments, which had caused fierce debate, have not even entered into force yet. No mechanism for their implementation currently exists. A government decree proposing a legal implementation mechanism collected only 73 votes in favor after being published, with more than 25,000 votes against. Educators played an active role in protesting this bill.

Whom You Can’t Cooperate With

Following the lead of the State Duma Commission on Investigation of Foreign Interference in Russia’s Internal Affairs and a corresponding commission in the Federation Council, Russia’s Prosecutor’s Office has long been actively searching for “pro-American groups” in Russian universities. Its job will now get easier.

The amendments propose restricting the general right to conduct outreach activities and banning “foreign agents” from engaging in them altogether. Moreover, control over Russian universities’ international education projects will be strengthened.

This is where the search for evidence of cooperation with “undesirable” agents originated. Special attention is paid to partnerships with the US, a “hostile country.”

How to Get Rid of the Undesirables?

American students and faculty have been the targets of academic rights violations before. In 2015 propagandist Dmitry Kiselyov named potential candidates for Russia’s “stop list” in his TV program:

As a result, Blacklin was kicked out of Russia on the pretext of visa violations, while White was laid off from the Nizhny Novgorod university, allegedly as part of the “restructuring of innovation governance.”

Accusations of visa violations are a common way of getting rid of professors from “undesirable countries.” In December 2019, for example, five University of Buffalo (NY) professors who had been invited to Russia by the business association Delovaya Rossiya to speak about their university were deported. The professors conducted a two-hour lecture doing exactly what they were asked, but a Ryazan court ruled that they had violated the terms of their tourist visas. All five professors were fined and deported.

Similar measures had previously been taken against Ian Bonner, a U.S. Master’s student at Kazan State University. In 2016 he was deported for alleged violations of the terms of his student visa.

Intelligence agencies encouraged these deportations, which were justified on the pretext of security concerns and became increasingly prevalent after the 2014 annexation of Crimea.

Until recently, it was inconceivable that a large international education project could be attacked solely because it involved American nationals.

The first joint Russian-American higher education project in Moscow was launched back in 1991, when Mikhail Gorbachev and George H.W. Bush agreed to establish the International University in Moscow. The university still exists, but the American side no longer has a role in its development.

The American University in Moscow, founded by dissident Edward Lozansky in 1991, does not have a real partnership with the US either. But then again, this university does not even conduct educational activities.

On the Role of Personality in University History

Since 1997, the Smolny Institute—and, consequently, SPbGU’s Faculty of Liberal Arts and Sciences—has been the only remaining joint Russian-American higher education project. The faculty was modeled after artes liberales, which centers around students’ freedom to choose their own learning path and receive a dual diploma from SPbGU and Bard College.

Alexei Kudrin, then Russia’s Minister of Finance, a member of the Smolny Institute’s board of trustees, and subsequently Smolny’s dean, played a preeminent role in the Institute’s creation and development. He not only ensured a favorable environment for its development and communication with the American side, but also attracted considerable resources to its endowment, which today comprises roughly half of SPbGU’s total endowment.

The evolution of this project from a small experimental institution in the bowels of SPbGU’s Faculty of Philology in 1997 to the Faculty of Liberal Arts and Sciences in 2011 took 14 years.

For another ten years, it existed as an SPbGU faculty.

In March 2021, however, the faculty announced its intention to separate from SPbGU and become an independent university. Alexei Kudrin, who actively supports this idea, said in a statement that the faculty should become an engine for implementing the liberal arts model of education in Russia.

Kudrin emphasizes that such institutions are appearing all over the world, and Russia should be no exception.

“This Is All Soros’s Fault”

The virtually unknown Coordinating Committee for Non-Profit Organizations of the Russian Federation asked the Prosecutor’s Office, the presidential administration, and the Federation Council to scrutinize the University of Liberal Arts that was in the process of creation “for close affiliation with foreign NGOs controlled by George Soros and engaged in destructive activities in Russia,” as well as to “recognize Bard College as an undesirable organization in Russia and a threat to the fundamentals of Russia’s constitutional order and national security (sic).”

According to the organization’s experts, Bard College, together with the Central European University, is used by George Soros as “part of a global network of subordinate education institutions” created to

For instance, the right-wing conservative channel Tsargrad cited an article by Bard’s executive vice president, Jonathan Becker, in which he stated that liberal arts education is an “antidote to the Marxist-Leninist ideology” and is associated with “increased civic engagement against the backdrop of eroding authoritarian regimes.” Tsargrad’s article, titled “Soros Instructed,” was illustrated with a photo montage of Kudrin and Soros.

Known for its “exposés,” the Federal News Agency, allegedly linked to Yevgeny Prigozhin, compared Soros to a dragon that keeps coming back in new disguises and accused Smolny’s faculty of anti-patriotic sentiments and spreading the materials of extremist organizations like Alexey Navalny’s Anti-Corruption Foundation.

As a result, law enforcement agencies took a keen interest in SPbGU’s partnership with Bard College.

How the Smolny Institute Was Punished

Smolny’s activities in the field of “increasing civic engagement” were associated primarily with the A. Gagarin Center for Civil Society and Human Rights Research, from which the author of the present article was fired in 2015 as part of a political purge.

The Center was involved in teaching, researching, and discussing issues related to human rights and civil society. Obviously, it was in no way involved in politics.

Its faculty’s critical thinking and independence is not something SPbGU’s present leadership is prepared to accept. This is one of the reasons behind Smolny’s decision to break away from SPbGU and create its own university: the Institute’s management could no longer protect the faculty from the administrative arbitrariness of SPbGU’s dean.

Paradoxically, shortly after submitting a request to the Coordinating Committee, SPbGU also asked the Prosecutor’s Office to investigate Smolny’s partnership with Bard College and the latter’s cooperation with the Open Society Institute.

And here is the result: On June 21, 2021, the Attorney General’s Office added Bard to its list of “undesirable organizations.”

Academics’ reaction was quite predictable.

Bard’s executive vice president, Jonathan Becker, wrote on his Facebook page that he had just recently opened a Russian-American seminar at SPbGU and now felt like he was separated from his own family: “Words cannot capture my sense of despair [at] the news that our partnership has been sundered.”

SPbGU, in turn, officially announced that it had notified Bard of the termination of their joint agreements.

A number of international organizations have already deemed this act directly detrimental to academic cooperation.

For example, the Association for Slavic, East European, and Eurasian Studies has issued a call to withdraw this decision, describing it as contrary to the 25-year experience of cooperation between Bard and SPbGU and at odds with the academic rights of Russian students and faculty at Bard.

Alexei Kudrin’s spokesman said that the process of creating a new university was ongoing and that it planned to cooperate with “eminent Russian and foreign institutions.”