Turning Yourself in to Competent Authorities 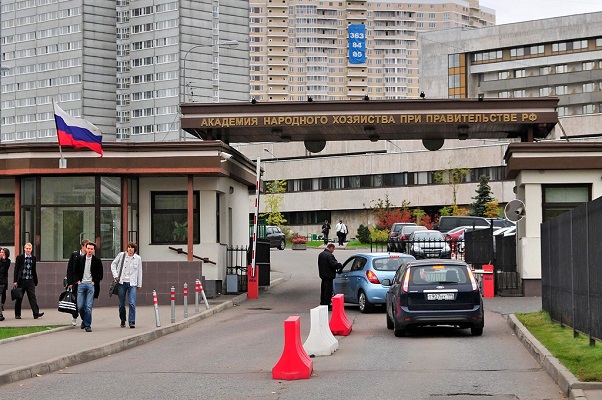 The Attorney’s Office suggests that universities search for dissidents among their faculty and students. What’s behind inter-district prosecutor Prostakov’s letter to one of Russia’s major universities?

PHOTO: The “experiment” in the Academy of National Economy and Public Administration will not be without consequences for academic freedom in Russia. («_TMY1735» by Free Photobank is licensed under CC BY-NC-SA 2.0)

The Nikulinskaya Inter-District Attorney’s Office in Moscow decided to investigate how the Russian Academy of National Economy and Public Administration under the President of the Russian Federation is complying with the law. The Attorney’s Office is demanding a wealth of information about the university’s students and staff—primarily about their supposed oppositional activities, participation in protests, or involvement in “undesirable organizations.”

The academic community received this news with shock. The Attorney’s Office is becoming a robust instrument of government encroachment on university autonomy.

The Role of Law Enforcement Authorities in Education

The structure of Russia’s Attorney’s Office is quite peculiar. To be more specific, one of its functions, under the Attorney’s Office Act, is “oversight of implementation of legislation.” Prosecutors often take a very broad view of this mission, including in it “information collection,” which is beyond the scope of what the law actually prescribes.

Legally, universities are required to answer any Attorney’s Office requests and, in the event of a disagreement, settle the matter in court. Few rectors would dare to do the latter.

The common practice in such cases is snide responses sent in bulk to various departments.

From time to time, prosecutors’ requests contradict the law so seriously that rectors speak out publicly about the fact that complying with them is impossible.

Interestingly, it was not the Attorney’s Office that was the first to attempt such transgressions.

In 2009, Deputy Chief of the Central Internal Affairs Department Major General Aleksandr Ivanov expressed in his letter to Yaroslav Kuzminov, rector of the Higher School of Economics (HSE), that he hoped to sort out the affairs of students detained during protests in December 2008. In particular, General Ivanov recommended that Rector Kuzminov “consider eliminating factors conducive to delinquencies, as well as attend to the question of the appropriateness of these students’ continued enrollment at HSE.”

The HSE rector reacted strongly, responding that such demands were “unacceptable.” Nevertheless, the detained students were asked to submit explanatory memoranda.

A year later, in 2010, and now in St. Petersburg, the Vasileostrovsky and Central District prosecutors demanded that St. Petersburg State University students from the North Caucasus provide in writing the details of their family connections to felons, terrorists, and members of illegal armed groups. Students were required not only to disclose the first and last names of their relatives, but also indicate if they had automobiles. If a student did not submit the required information, s/he was threatened with being denied university housing.

After an inquiry was conducted, the Attorney’s Office withdrew its demands, citing a “technical error.”

In 2011, against a backdrop of mass protests across the country, prosecutors demanded that a number of universities in both Moscow and St. Petersburg provide lists of “disloyal” students. St. Petersburg State University rector Nikolay Kropachev made an official announcement that the university “does not have to, and will not, do such a thing.” Nevertheless, some departments were immediately recommended to gather the requested information and pass it on to the rectorate.

Almost a decade later, the Academy of National Economy received a striking letter from the Nikulinskaya Inter-District Attorney’s Office in Moscow.

Many things have changed since 2010. Universities’ ability to counter government infringement has declined. At the same time, the scope of prosecutors’ demands—and prosecutorial capacity—has grown.

The letter from the Attorney’s Office has already sparked a strong reaction from the academic community. The University Solidarity Union called the prosecutors’ demands a violation of university autonomy, as well as of the Russian Constitution—specifically of Article 29, which protects the freedom of speech.

Let us take a closer look at those prosecutorial requests that fall within their purview and those that showcase prosecutors’ abuse of their authority.

The Attorney’s Office within Its Purview

The Attorney’s Office requires universities to provide such paperwork as their license and documents detailing admission and expulsion procedures, the organization of online learning, and the funding of education programs, among others. These data are requested under Article 22 of the Attorney’s Office Act of the Russian Federation.

According to Article 21 of the Attorney’s Office Act, the subject of prosecutorial oversight is “compliance with the legal norms adopted by the bodies and officials specified in the present paragraph.” In other words, prosecutors are legally permitted to request and receive documentation relevant to the operations of a given institution—in this case, a university.

So far, everything is within the limits of the law.

Where the Attorney’s Office Goes beyond Its Purview

Prosecutors’ abuses begin when they demand paperwork of an entirely different kind:

Furthermore, ordering universities to assess the “legality of providing fee-based educational services” is an attempt to shift the burden of carrying out the prosecutors’ responsibilities onto the university. How can universities assess the legality of their own actions?

Explaining and detailing what it is that universities are expected to turn themselves for is remarkably interesting in and of itself.

The case of the European University at St. Petersburg and its first shutdown naturally comes to mind.

The project “Interregional Electoral Support Network for Improved Election Monitoring in Russia,” which was supported by the European Union, was labelled an “attempt to interfere in the electoral process.” This is how the university’s troubles began, culminating in its temporary shutdown back in 2008.

The section on “ideological influence” encompasses:

Clearly, in the eyes of prosecutors, all of the above lead to the emergence of “pro-American pressure groups.”

A number of provisions contained in the letter not only violate the principles of political pluralism and university autonomy, but also threaten a traditional university freedom—the freedom of research.

For instance, “interference into the internal affairs of the Russian Federation” is explained in parentheses as “introducing proposals to improve and optimize the operations of government authorities, as well as conducting monitoring activities and publicizing their results.”

Such an interpretation of “political interference” is, unfortunately, nothing new. According to the Russian Ministry of Justice, the abovementioned activity has long been considered political. In line with this definition, many research institutes have been assigned the status of “foreign agents” for discussing various research studies. For example, the Center for Independent Social Research was included on the list of foreign agents for reviewing a study of the institute of justices of the peace.

(Read more in Darya Skibo’s “Russia: The Number of Foreign Agents Will Rise”)

The Attorney’s Office is proposing that universities report on events aimed at “falsifying world and Russian history in order to pursue the geopolitical interests of anti-Russian forces.”

As historian Ivan Kurilla notes in assessing how the recent constitutional amendments affected the freedom of historical research, “control over historical interpretations [now] falls into the hands of the state, represented by punitive agencies.”

The language the Attorney’s Office uses betrays its anxiety about the internationalization of education, academic exchange, and cooperation with foreign partners in general.

“Participating in events aimed at recruiting gifted and promising Russian youth to study at foreign universities” is singled out as a special issue to which all universities should be paying attention.

Technically, the internationalization of Russian education is widely considered to be one of the most important factors in its development. However, according to prosecutors, it is a direct challenge to national security and the social order.

Such a conceptualization of academic exchange clearly has its roots in the Soviet era, which combined the rhetoric of scientific exchange with paranoid control and spy mania.

Interpreting “Criticism of the Government”

Finally, prosecutors’ special attention is directed at those who criticize Russia’s foreign and domestic policy in general.

The request suggests informing the Attorney’s Office if faculty, staff, or students:

Universities are invited to attend with special attention to texts about “political repressions in the Russian Federation,” the “occupation of the Crimean Peninsula,” and “informational threats to the international community from Russia.”

Undoubtedly, it is possible that such an elaborate text is an expression of “executive excess” and does not reflect the overall policy of the Russian law enforcement authorities vis-à-vis university faculty and students.

However, the structure, content, and many details of the document make it quite possible that it is, in fact, an unintentional leak (due either to laziness or neglect) of a real internal “brochure” utilized by the Russian law enforcement authorities to combat present challenges to the established order.

The wording of the threats and the writing style take us back to the late Brezhnev or Andropov era, when the existence of academic freedom was simply unimaginable. There has not been a more menacing document in the recent history of Russian education.