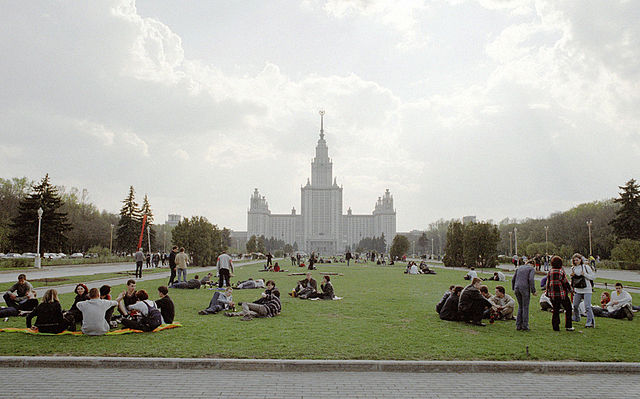 Is a student a source of hidden threat to a university or an ally in upholding academic freedom? The answer depends on the university’s leaders.

Photo: If a university is a corporation and higher education is a service, then a student is its consumer or a client. The client has rights. (Photo: Alexander Polyakov, Moscow, CC BY-SA 3.0)

Ideals from the Past

In modern Russia, conversations about protests and rebels often refer to certain images. The romantic image is a Parisian student on the barricades in 1968, while the harsher one is a Russian revolutionary student in the early 20th century.

These images are held up as ideals that it would be difficult for students in the modern age to achieve.

Realities of the Present

This fall, more than 4 million students commenced their studies at universities in Russia. And they are becoming a kind of community, even though they have very different worldviews and personal ambitions.

In 2017, Valeria Kasamara, the head of the Laboratory of Political Studies at the Higher School of Economics (HSE), in an interview given to Lenta.ru, said, in reference to polls they had conducted with students from the leading Russian metropolitan universities, “This is not France.” Russian students, she claimed, are “mercenary,” do not know history, “are afraid of unrest and protests,” and only want to “satisfy their own interests.”

The Zhukov Case.  In 2019, she—as vice-rector and a candidate for the Moscow City Duma—had to respond to an open letter written by undergraduates, Ph.D. students, employees, and graduates of HSE regarding the elections to the Moscow City Duma. She did so by stating her position—and that of the university—on the case of political science student Yegor Zhukov, who stood accused of calling for extremist activity in speeches posted on YouTube.

The DOXA Case. In the same year (2017) that Valeria Kasamara shared with Lenta.ru the research results collected by her laboratory, DOXA—a student journal—appeared at HSE. Two years later, in December 2019, the university deprived the journal of its student media status due to its discussion of social and political events. Today, four DOXA editors are under house arrest as part of the associated criminal case.

These and other recent events with student participation—and not only at HSE—confirm that we should not expect a single generation or social group to bring about much change, but nor should we exaggerate students’ inactivity.

The editorial board of DOXA does not believe that “a modern university is a unique space of freedom” but strives to “make it such.”

DOXA does not draw “a distinct line between the university and politics, because the creation of an anti-authoritarian and democratic space within and beyond the university is an important political action.”

The journal’s history shows both that it is impossible to keep independent student initiatives within one university and that there are risks associated with any situation where they transcend it.

Activist groups can be found at a number of different Russian universities, although their activity levels and self-assigned tasks vary. Here are a few examples:

Why Do Students Need Activism?

While the students of the Sorbonne may be a particular example to Russian youth, one should not forget about the traditions of student activism in other countries.

In the second half of the 20th century, American students fought against racial segregation and the Vietnam War, as well as the nuclear arms race and apartheid in South Africa. Although they did not always achieve visible success, they nevertheless contributed to bringing about a gradual change in societal attitudes. The participation of students in the Occupy Wall Street and Black Lives Matter protests confirms that they remain a driving force of the social agenda in the 21st century.

Beyond issues of public justice, American students are also concerned about vital challenges to their campus life. Although the Million Student March in November 2015 did not attract a million participants, it drew attention to the problem of rising student loan debt. Meanwhile, the shift to distance learning due to the pandemic has prompted some students to sue their colleges for partial tuition refunds.

American universities may verbally support student activism both on and off the campus. But at the same time, they are willing to suppress specific forms of student activism that they consider pose a threat. For example, the University of Chicago and a number of other universities opposed Masters and Ph.D. students’ effort to unionize to protect their labor rights.

American youth are often described as “politically apathetic and ignorant,” and their experience of student activism is far from an unmitigated success story. However, activists have succeeded in securing the resignation of an unpopular university president, unionizing, and convincing the rectorate to provide financial support to students facing difficult situations.

Is it Possible to Be Free from Society?

It is quite logical that student activism at the university occurs primarily to solve problems that students personally face. It is easier to stand up for rights as a group, but these rights are difficult to separate from the right to learn:

Some internal issues are inseparable from events taking place outside the university. Such was the case with the expulsion of students from Russian universities for participation in protests in 2021 or the struggle of students from Moscow State University against the football fan zone in 2018.

The examples go on.

Is it possible to defeat harassment in a university if society as a whole has yet to find a comprehensive solution to this problem?

Is it possible to guarantee the quality of education if plagiarism and false dissertations can be found both in higher education and in public administration systems?

We can create a reputation as a “liberal” university, but we cannot protect the university from the problems of the society in which it exists. These problems will surface sooner or later.

Education Is a Service, a Student Is a Client

In Russia, where the employment of university faculty is increasingly precarious and the mortgage has become a symbol of ethical compromise, the question of corporate ethics is increasingly acute. Ethics, in turn, imposes restrictions on opinions about university affairs and socio-political problems.

On the other hand, if the university is a corporation and higher education is a service, then a student is its consumer or a client. A client has rights.

In clear recognition of this, students today—primarily fee-paying students—are willing to demand more from the university than their counterparts in the 1990s or 2000s.

However, the position of a student is also precarious. S/he may be financially dependent on parents. Male students may be afraid of expulsion and conscription.

For the university, potential clients—future students and their parents—are sometimes more important than current ones. On this logic, students are primarily a source of hidden risks. The noise they make and the resulting scandals can harm the reputation of the university and negatively impact its position in formal or informal rankings.

Student academic freedom can be interpreted narrowly as the freedom to learn—meaning, among other things, freedom from indoctrination.

A broader interpretation includes the possibility of participating in university self-government or, at a minimum, of discussing issues directly related to the lives of students at a single university.

Whereas the academic freedoms of teachers are actively discussed and well protected, student academic freedom often receives less attention. For example, in Canada academic freedom is guaranteed to teachers under a collective bargaining agreement. But these freedoms are tied to labor rights and by definition do not apply to students.

In Western universities, discussion of students’ academic freedom often centers on the potential threat students pose to scientific pluralism and freedom of teaching. This may happen, for example, when student activists protest against inviting a given lecturer to speak on campus or file a complaint about politically incorrect statements made by a professor.

The American Association of University Professors (AAUP) at one time formulated not only principles of academic freedom for teachers, but also principles of tenure and freedoms for students:

The document, adopted in the United States in 1967, appears very relevant to Russia in 2021.

University and Student: Together or Apart?

In the winter of 2020-21, many state universities in Russia held preventive conversations with students in the run-up to protests. The students were scared of expulsion. Some threats were acted on. It is difficult to feel part of a university community when faced with such hostility.

When one is endeavoring to create and maintain an academic community, things should be done differently. For example, the Central European University in the same year expressed solidarity with students and graduates who faced persecution for their views and violation of their rights in their homelands, publishing letters of support for CEU Masters student  Ahmed Samir Santaoui from Egypt and CEU graduate Anna Wellikok from Russia. This is a good example, albeit taken from a different socio-political context.

The resonant court cases of recent years in Russia have become a test for the guild solidarity of representatives of different professions: journalists, actors, doctors, etc.

Students may be a specific, temporary, and transitional community, but they have passed this test better than the heads of universities, who have tried to disguise their lack of solidarity with pathetic statements about neutrality and positions above politics.

True, the cost of such testing is high: in the words of the DOXA editors, “the authorities unwittingly push students and employees of different universities to inter-university solidarity that can bring about criminal cases and political prisoners.”

At the same time, we should not forget that “demonization” and persecution of student activists is not solely a Russian phenomenon.

Students—as clients of an educational corporation—have a limited opportunity to fight for the preservation of courses and to vote for the renewal of contracts for teachers who are important to them.

Professors have a limited opportunity to support student initiatives and protect the rights of students within the university bureaucracy.

Together, they have a better chance of creating sustainable structures to advance common interests and build a true academic community.

When it comes to the quality of education (for example, switching to distance learning), when the fairness of assessment is questioned, or when accusations of sexual harassment are pronounced, students and teachers may find themselves in different camps. However, in upholding academic freedom and academic solidarity, they must be allies.

Nina Rozhanovskaya is a coordinator of scientific and educational projects at the Kennan Institute in Russia.

← Previous: The Number of “Wrong Historians” Is Growing Next:Where Is “Own” Scientific Development Heading? →