The Number of “Wrong Historians” Is Growing 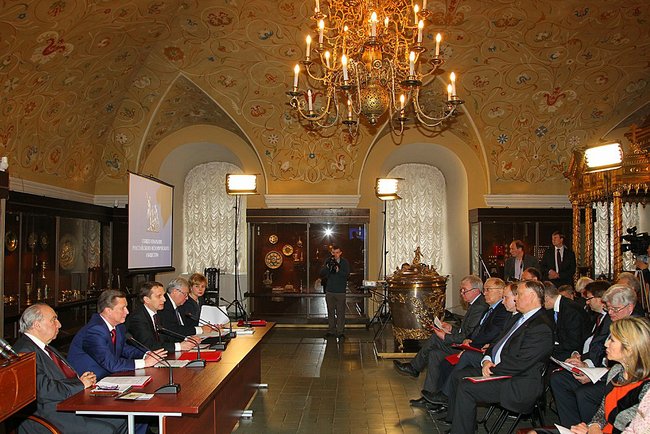 Government repression of “wrong” history is on the rise. In its place, a single ideology is gaining strength.

Photo: The Russian Historical Society has become an active conduit of a “truly patriotic” version of history. (Photo: The Presidential Press and Information Office, CC BY 4.0)

The Holocaust Is a Target of Mnemopolitics

The law on national honor adopted in Poland, for instance, prohibits accusing the Polish people of having contributed to the Holocaust. Such accusations are interpreted by the governing party as attempts to falsify history. Significantly, however, proponents of the law greatly exaggerate the prevalence of such behavior.

The criminalization of mnemopolitics (politics toward history) is very dangerous. Freedom of opinion is being sharply restricted. Academic freedoms are coming under direct and indirect attack. Researchers are becoming defendants in criminal cases about “falsification of history.” They are also at risk of criminal prosecution for independent thinking and debates on issues introduced by the government as elements of the state ideology.

The first to be affected by the Polish law were Holocaust historians Barbara Engelking and Jan Grabowski. By court decision, they had to apologize for “inaccuracy in their research,” which unveils the cooperation of some Poles with the Nazis.

Meanwhile, defenders of academic freedom criticize criminal prosecution for Holocaust denial, which has been adopted by some European countries. Historians consider such laws to be restrictions on academic freedom and freedom of expression.

Mnemopolitics and the Great Patriotic War

The principles of Russian criminal mnemopolitics relating to World War II, about which we wrote in November 2020, are based on a false statement: that criminal prosecutions on the grounds of “commemoration of World War II” and “protection of veterans’ feelings” correspond to the European practice of prosecution for Holocaust denial.

Grigory Vaipan, the author of the report “Russia: Crimes Against History,” says the Russian law on “rehabilitation of Nazism” that prohibits criticizing the Soviet government’s actions in World War II does not protect the memory of victims but rather silences those who speak out about the crimes of the government.

Among the 2020 amendments to the Russian Constitution appeared an article on “historical truth protection” (Article 67, part 3). According to the article, “The Russian Federation … protects the historical truth. The law does not allow downplaying the significance of the heroic deeds done by the Russian people in the defense of the Motherland.”

The Free Historical Society drew attention to the fact that “historical memory cannot be the subject of constitutional regulation.” The concept of “historical truth,” which appears in the Constitution, is “fatal for historical science.”

Some legal academics indicated that the statement was close, in their view, to “a single ideology,” which would directly contradict the Constitution’s claim to ensure freedom of thought and freedom of speech.

However, the concerns expressed by historians and legal academics were ignored. Indeed, the amendments gave a new impetus to Russian mnemopolitics.

In an interview for the FIDH report, Nikolai Koposov, a researcher of Russian historical politics, noted that the leadership of Russian universities uses sophisticated types of pressure to force “overly liberal” professors and researchers to be silent.

Thus, with the active support of the government, the following organizations have re-emerged:

Both societies are active conduits of a “truly patriotic” version of Russian history.

Myth as an Example of “Historical Truth”

The myth of Panfilov’s 28 Men, actively promoted by Vladimir Medinsky (now an advisor to the president), is an excellent example of how “historical truth” is fabricated and introduced. It is exactly the kind of “patriotic” position actively developed and supported by the aforementioned societies, which are de facto state institutions.

Historians who challenge the “sacred myth” using documents face direct threats from Medinsky, as if they are undermining the significance of the Soviet people’s sacrificial struggle for their Motherland.

For instance, the head of the State Archive of the Russian Federation (GARF), Sergei Mironenko, published documents demonstrating that the whole story of 28 soldiers and officers who allegedly held back dozens of German tanks near Dubosekovo is a fiction created by Soviet military propaganda and contains no grain of historical truth.

As a sad consequence of the decision to publish these data, Sergei Mironenko was removed from his position as director of GARF and given an “honorary” role as a scientific advisor.

A major tool that helps to concentrate “historical truth” in the hands of the government and pro-governmental institutions is restricted access to archives.

The formal and informal restrictions imposed on achieves related to the repressions of the 1930s and the Great Patriotic War pose a serious impediment to independent studies. Meanwhile, those who adhere to the “party line” enjoy special priority access.

As a result, the position of the current political regime on fabrication of the “historical truth” is getting stronger. For example, President Putin’s article about the causes of World War II and those who were responsible for its beginning practically canonized today’s “historical truth” about this stage of Russian history.

Now there can be no dispute.

The Triumph of the “Cult of Victory”

Actually, a certain quasi-religious tradition is emerging in the country. An independent Orthodox priest has called it a “Cult of Victory.“

The project to open historical parks such as “Russia—My History,” launched in 2019, is a shining example of this cult. Some professional historians think that the project has a serious ideological bias toward the idolization of the government and the stigmatization of any critics—from Decembrists to dissidents.

As a result, any discussion of or disagreement with the officially established “historical truth” has become dangerous for skeptics. Here and there, the criminal and administrative codes come into play.

Since 2014, it has been possible to get a criminal record in Russia for the “rehabilitation of Nazism.” In recent years, this has been supplemented by an article addressed at “insulting veterans’ feelings” (Article 354.1 of the Criminal Code of the Russian Federation).

Persecution for “history” is not limited to the history of the Great Patriotic War. Independent historians and institutions who study the Soviet repressions are likewise persecuted.

Back in 2018, the lawyers of the international human rights group “Agora” counted more than a hundred cases of persecution related to history. The victims were researchers who somehow dealt with the history of repression.

Nor is it only Russian citizens who study military history who can be persecuted.

German historian Sebastian Stöpper has published numerous studies in which, according to the opinion of the Bryansk prosecutor, “the importance of partisan military actions in the Bryansk region is downplayed [and] the partisans and their actions are negatively assessed […] which can foster the development of a negative attitude toward the social ideals and spiritual values of modern society (heroism of ancestors, respect for veterans of the partisan movement and their military merits).”

As a result, these publications were classified as extremist.

Factually, the publications written by military historians are becoming dangerous.

The prosecutor’s office on Sakhalin opened a criminal case relating to the sale of the history book Wehrmacht Soldiers. The case was initiated under the article prohibiting the display of Nazi symbols—even though the book could hardly have avoided including photos of the swastika.

According to “Agora,” to date, several dozen historical books and studies are banned for distribution in the Russian Federation on the same pretext, including A.V. Okorokov’s Fascism and Russian Emigration (1920-1945) and K.A. Zalessky and P. Hausser’s Hitler’s Black Guard: The Waffen-SS.

Andrey Pozdnyakov, a Novosibirsk ethnographer, is being investigated under Article 354.1 “about the rehabilitation of Nazism.” The reason for the investigation is a column in the Novosibirsk news in which the author admitted that he does not like Victory Parades and explained why.

Alexey Navalny was also convicted of “insulting a veteran” after he criticized the veteran’s participation in the campaign for the constitutional amendments.

A regime of active struggle against “historical falsifications” is being established in Russia. This struggle aims to promote and disseminate a single version of “true history”—the history pronounced by the government.

This campaign not only directly contradicts the Constitution (even in its current form) but threatens history as science and historians as members of the academic profession.

Dmitry Dubrovsky, PhD (History), is Associate Professor at the Higher School of Economics (Moscow), Associate Research Fellow at the Center for Independent Social Research (St. Petersburg), and a member of the St. Petersburg Human Rights Council.