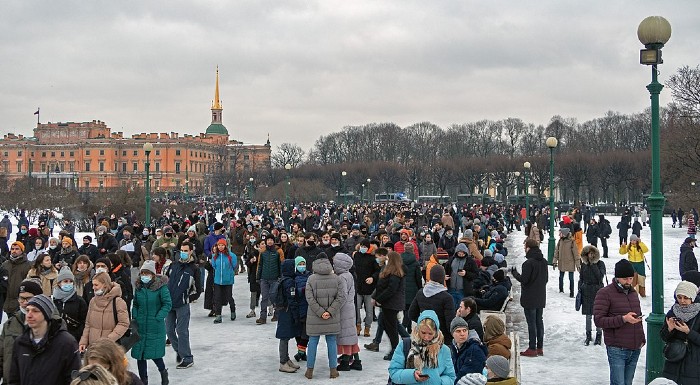 The criminal prosecution of the editors of DOXA, accused of illegally recruiting minors to participate in protests, raises an important question: To what extent are students who are critical of the existing political regime perceived by this regime as a threat?

And does the fight against this threat violate academic rights and freedoms?

How the KGB Guarded Soviet Universities

Securitization of universities began a long time ago and may never have ended. Since Soviet times, every university—like most other organizations—has had the so-called First Department. Its vigilant officers were in charge of safeguarding the Soviet Union’s countless secrets.

KGB officers who worked in these departments were in contact with the so-called Fifth KGB Directorate, which oversaw international exchange and foreign students and faculty.

Universities also had the post of Vice-Rector for International Affairs, which was reserved for KGB officers.

Vladimir Putin held the position of assistant to the vice-rector for international affairs at Leningrad State University in the early 1990s.

It seems that the Soviet experience has had a considerable impact on the practice and logic of the work law enforcement authorities conduct with students.

Students are deemed to be not only potential instigators of unrest but direct recipients of “American influence.” The government bodies “counteracting” such influence are the Duma’s and Federal Council’s respective Commissions on the Investigation of Foreign Interference in Russia’s Internal Affairs.

Their work is based on a number of repressive laws directly affecting the state of academic freedom in Russia:

Presumably, this strengthening of anti-American and anti-Western sentiments among the Russian political elite is behind incidents like the investigation of St. Petersburg State University’s (SPbGU) partnership with Bard College in New York, which is allegedly financed by organizations deemed “undesirable” in Russia—in spite of the fact that SPbGU signed the partnership agreement with Bard over 20 years ago.

The habit of labelling any student criticism of the government or political regime as “inspired by the West” has distinct Soviet roots.

The Educational Qualification study, published by DOXA in cooperation with the editors of Proekt, showed that across 100 universities, 78 heads of security departments or vice-rectors for security are retired or current law enforcement officials.

This finding is seemingly nothing special: security issues are part of routine business for any university. However, practice shows that officials in charge of security often resort to suppressing dissent in the name of safeguarding order.

Persecution of students who participate in political opposition in one form or another has always been part of Russia’s educational landscape.

In the early 2000s, it was rather episodic. DOXA and Proekt’s study offers examples of students getting expelled—or being threatened with expulsion—for joining opposition parties or engaging in protests.

University leadership took an obvious, observable political position: they conceived of publicly funded institutions as state-controlled. SPbGU’s rectorate expressed precisely this position to the author of the present article: “You can resign first, and then do whatever you please. But as long as you are employed by a public university, you have no right to critique the government.”

Importantly, for quite some time, this view affected the rights and freedoms of faculty, but only rarely students.

In 2009, in response to a recommendation from the Main Directorate of Internal Affairs of the City of Moscow that they “expel dissidents,” for instance, the leadership of the Higher School of Economics (HSE) stated, “students’ political views are a private matter.”

However, after the protests of 2011–2012, the situation took a very different turn.

The established practice of controlling foreign nationals was leveraged to put pressure on the least protected category of students: international students.

For example, German student Lukas Latz was expelled from SPbGU for obviously politically motivated reasons. He was accused of working as a journalist without a work visa because, as part of his sociological research project, he interviewed protesters against landfill construction in Shiyes. In an interview for Svoboda, Latz said, “the university… cooperates closely with law enforcement agencies” and “coordinates nearly every step with security services.”

A similar story unfolded with a student from Uzbekistan, Andrei Lagunin, who was detained at the end of January 2021 at a Kazan rally in support of Navalny. He immediately received an order from immigration services to leave the country within three days.

Nevertheless, the brunt of the blow was taken by Russian students. They are currently the main target of pressure in the form of threats from the rectorate and public statements about unacceptable “extremist actions.” The “extremist” actions in question are civil protests.

Some threats have already been carried out.

At Astrakhan State University, three students who participated in a protest were expelled for “violation of rules of internal order.”

We have long since pointed out that various internal university regulations serve as the basis for infringing on faculties’ and students’ freedom of speech. Today, these mechanisms are increasingly used to expel students who express critical views. The regulations have been amended in a way that plainly makes loyalty to the political regime a condition of enrollment at Russian universities.

For instance, Samara State Technical University amended the Employee and Student Code of Ethics. The new amendments forbid participation in unauthorized protests, rallies, demonstrations, processions, or pickets “directed against the state order and the Constitution of the Russian Federation.”

In addition, students and teachers are prohibited from “disseminating information and expressing a position (including on social media) directed against the state, region, or university; damaging the state order or authority and business reputation of the university; or discrediting the image of a citizen of the Russian Federation and employee/student of the university.”

Here emerges a system of police control over students with critical opinions, the components of which include:

It was in this environment that the DOXA-OVD project was created. Its goal is to collect information about students persecuted for participating in protests and coordinating help.

Obviously, students are very capable of organizing resistance and defending dissidents within the framework of the law and the Constitution without any involvement by the mythical “hand of the West.”

In response, a criminal lawsuit has been filed against the editors of DOXA: Armen Aramyan, Vladimir Metelkin, Natalia Tyshekvich, and Alla Gutnikova.

← Previous: Science vs. Scientometrics Next:How “The Chosen” Are Chosen →